Time to break out the clippers for a good cause! On April 25, local charity Cal’s Angels will hold its fourth annual “Just Shave It” event at Pollyanna Brewing Company in St. Charles, Ill. Shave and haircut participants can use this opportunity to raise awareness and funds for pediatric cancer, with Cal’s Angels ensuring all proceeds stay in the community to support clinical trial research.

“Just Shave It” also has a virtual component, so participants can take a video of their haircut or shave from home and share on social media to keep awareness and fundraising efforts going strong.

Why shave your head for pediatric cancer? Because awareness is critical to the fight. Many people aren’t aware that gold is the ribbon color for pediatric cancer or that September is Pediatric Cancer Awareness Month. “Just Shave It” helps put those details on the map.

After losing her stepson Cal Sutter to acute myelogenous leukemia, Wahlberg co-founded the 501(c)(3) organization Cal’s Angels in 2007. The name, Wahlberg explains, comes from Cal’s all-star baseball team, the Angels. The organization’s first event, a golf outing planned in just two months, was highly successful and inspired Cal’s Angels to expand its work in the fight against pediatric cancer.

The organization has since gone on to develop a three-tiered mission including wishes, awareness and research. Through the wishes program, Cal’s Angels is active in all major Chicagoland hospitals and grants young cancer warriors $1,000 wishes.

The organization also visits local schools in September to provide gold athletic apparel for a variety of groups including volleyball, soccer, football and swim teams. The gold gear often catches the eyes of other teams and parents, and this visibility helps raise awareness and start much-needed conversations around pediatric cancer.

As part of the organization’s research component, Cal’s Angels’ partnership with Lurie Children’s Hospital supports an innovative drug discovery program with the goal of finding more effective and less toxic therapies for pediatric cancer. All funds raised from “Just Shave It” will help Cal’s Angels continue this part of its mission.

In a typical year for “Just Shave It,” local elementary schools actively participate and even have a bit of friendly competition amongst themselves. School teams shave their heads to support a specific local pediatric cancer warrior. The kids are highly enthusiastic, with many joining in year after year. Some even save up their hair all year for the event, Wahlberg adds.

While “Just Shave It” is in itself a fun and impactful way to raise awareness, the resulting haircuts also prove to be an important conversation starter among kids. A positive comment on a peer’s fresh buzz cut can lead to even more attention for pediatric cancer. “I don’t think there’s anything more powerful than kids helping kids,” Wahlberg says.

For more information on “Just Shave It” and Cal’s Angels, visit calsangels.org/shave.

Meghan Konkol is a freelance writer and French to English translator. Since being diagnosed with stage III triple negative breast cancer at age 32, Meghan has taken an active role in the cancer community to share stories and resources. She strives to support conversations around cancer and empower others to advocate for their own health and well-being. 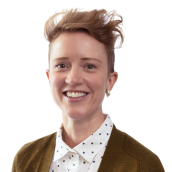 In Heaviness and Light