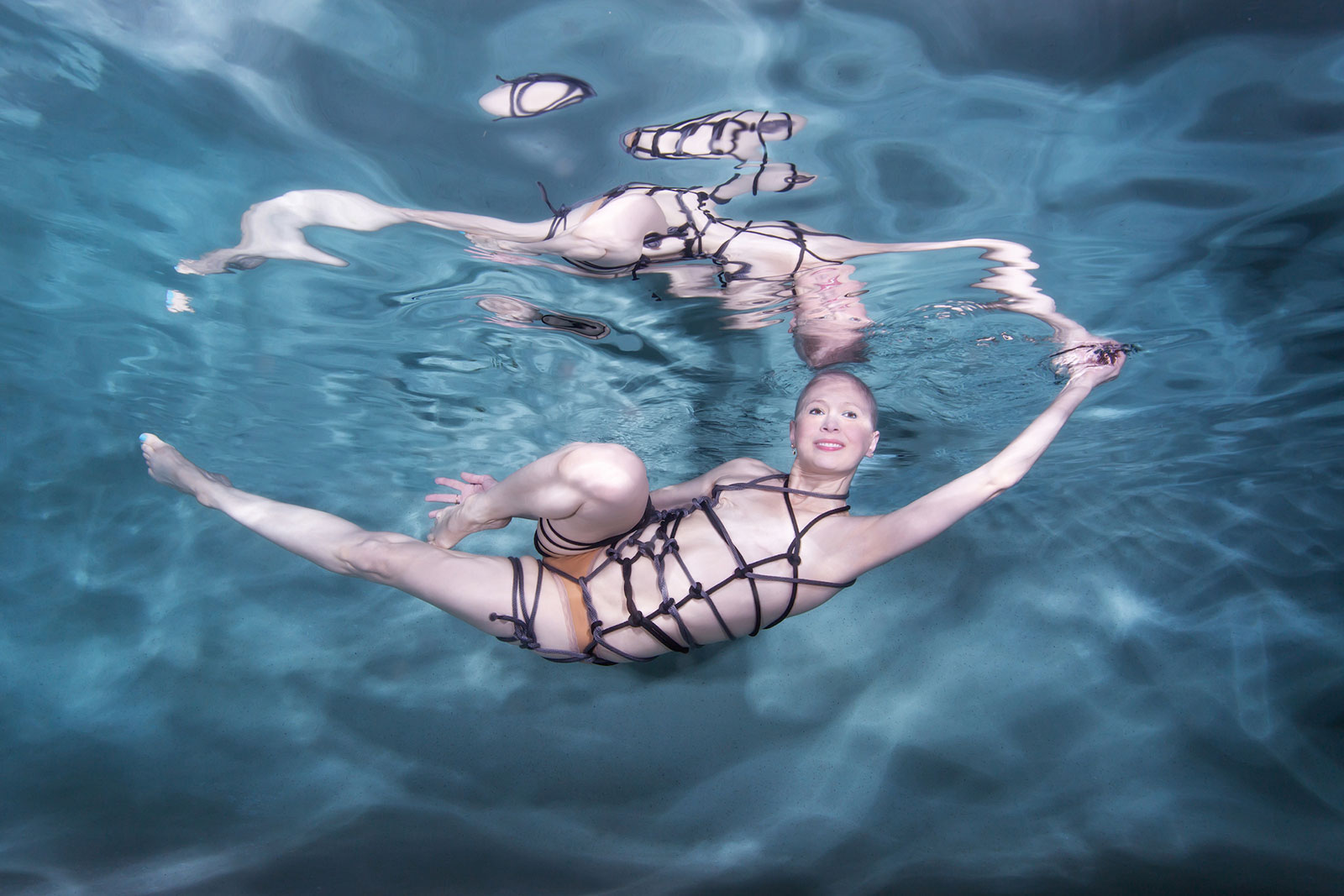 “I hope to do a lot of things, but I hope that [survivors] feel more reconnected with themselves when they do this photoshoot,” Erena Shimoda says. Shimoda, creator of the “Underwater Healer” project, has spent nearly a decade photographing survivors of all stripes—including cancer survivors—underwater. The process, she says, can open up doors that may have closed due to past trauma, whether they be physical or psychological blocks. She should know. Shimoda tested the process on herself.

Photography is a relatively new practice for Shimoda. But life in the water comes natural to her after 15 years of scuba diving experience. During her journeys underwater, Shimoda began photographing marine life with a disposable camera. “I just love taking pictures underwater because it is a different world down there,” she says. Later, she pursued private underwater photography sessions from a man in Texas, turning her underwater hobby into a unique skill.

Around the same time, Shimoda also began volunteering as a general helper for the American Cancer Society’s “Look Good Feel Better” program. Warriors and thrivers gain confidence and boost their self-esteem by learning how to put on makeup and wigs.

“They’re looking for hope to come into this room and transform and do something new,” Shimoda recalls. “It was giving them courage to do new things so that they feel beautiful again.”

These combined experiences inspired Shimoda to launch her “Underwater Healer” project in 2013. Her first client, a cancer thriver, was one of Shimoda’s co-workers. Since then, Shimoda says she has photographed “maybe over 150 clients.”

“My clients are pretty much new to doing underwater modeling. So when they challenge themselves with doing new things, they feel this confidence and then they come out and they go home with their chin up and being happy and smiling,” Shimoda says.

A typical “Underwater Healer” session begins over email and with a video call. “Because we cannot communicate in the water, I want them to feel more comfortable with me holding the camera or how I am photographing [them],” says Shimoda. “And I usually know what they’re feeling or what they’re thinking when they submerge under the water because of their body language and also their facial expression.”

Body language is a key component to Shimoda’s work. “I’m originally from Japan and I came here with no English,” recalls Shimoda. “So for a long time, I had to guess what people were talking about because I didn’t know what they’re saying. Their body language—their facial expressions—are pretty much my language.”

Shimoda describes the first 10 minutes of any session as “a little surprise” for her clients. “But I like that surprise and I want them to know that it’s going to be okay,” she says. It is an adjustment period both physically and psychologically. “The important thing is you have to relax and not panic,” says Shimoda. That amount of time underwater begins to slow down one’s heart rate, allowing the person to stay underwater longer.

In addition to cancer survivors, Shimoda has also photographed other types of survivors, from trauma to sexual assault to veterans. She was inspired to branch out after suffering her own traumatic injuries.

During a late-night car ride back from a trip to Arizona, Shimoda and her father got a flat tire on the freeway. Their car flipped and Shimoda was thrown out of the vehicle. Besides fracturing her “entire body,” Shimoda also suffered from a traumatic brain injury. “[It] was a miracle I survived, but they couldn’t help my father,” reveals Shimoda.

The experience left her with a lingering sense of “survivor’s guilt,” she says. “I think I was holding it inside. I was trying to forget,” says Shimoda. “I got into this deep-down depression and I didn’t know why. I didn’t know what the depression was. And all of a sudden, I couldn’t get out of my room. My eating habit was really poor and I couldn’t talk to anyone. Like, what is going on?”

After seeking help, Shimoda was prescribed an antidepressant. “It was going on for way too long already, but the medicine didn’t really work for me,” says Shimoda. “I didn’t feel good […] I just felt really worse.” She eventually changed meds three times over the course of a year with little success. “I still [had] this survival mode that I wanted to live. I didn’t want to waste my life because I still felt this survivor’s guilt. I wanted to make [my father] proud for living.”

After some contemplation, Shimoda remembered her love for scuba diving. She began to swim laps at local pools. “I would lap swim every day and I just felt so much better. And I dropped all my medications since,” says Shimoda.

“When I submerge underwater, the noise is blocked. [I] don’t hear anything else but probably my heartbeat. Sound travels faster underwater, so all of the sounds you hear are like a white noise,” she says. “The vibration is healing my thoughts. Like purifying my brain and my mind and spirit. The pressure that I get with the water pressure is really tight. It’s kind of making me feel like the ocean is hugging me.”

Shimoda leaves the water feeling rejuvenated, like a new person. Other survivors she has worked with feel the same. “They always have some dark spot that I think being underwater [is] letting go. They could let those things go and also they could tell me those stories even though they didn’t know me,” she says.

Although the COVID-19 pandemic has restricted how often and where Shimoda can photograph clients or swim laps herself, that hasn’t changed her love of the water. “Everybody is getting anxious and depressed,” she says. “It’s hard to find that pool of water but whenever you find it, I usually recommend it to go in.”

To learn more about Erena Shimoda and her photography, visit erenashimoda.com.